Gann trading without the college courses

William Delbert Gann was born June 6th, 1878 ...the son of a cotton farmer. He started trading when he was 24 years old, and no trader before or since has arguably been spoken about more. Many, crediting him with the most valuable insights and teachings in the 20th century. Others, deeming his work invaluable, irrelevant, or simply impossible to decode and use practically. Gann trading subsequently has been a hot topic of debate for over a century.

WD Gann lived in what I call the "Informational Renaissance". His trading career and subsequently his body of work was written at the same time two other great traders and future educators were studying and coming to their own conclusions, namely Ralph Elliott and Richard Wyckoff. Ralph would go on to say that the market was entirely predictable based on internal wave structure and patterns inside of those waves. Wyckoff would later be recognized as the father of modern Volume Spread Analysis, or VSA, espousing that the markets were also predictable based on internal volume measurements. 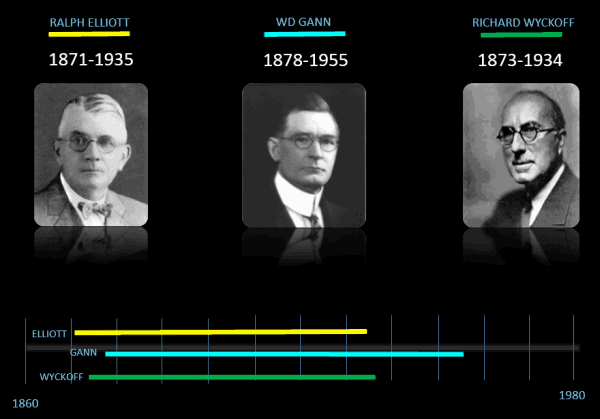 The 3 horsemen of the Trading Information Apocalypse

Gann followed a third, and different path....involving Time. According to Gann in his Forecasting by Timecycles Course,

"TIME is the most important factor in determining market movements and by studying the past records of the averages of individual stocks you will be able to prove for yourself that history does repeat and that by knowing the past you can tell the future.  There is a definite relation between TIME and PRICE..."

As a leading indicator developer, I'll admit Gann's body of work intrigued me. I was especially interested how he incorporated the working knowledge of his spiritual beliefs in with his scientific observations. They were seamless to him, and as such formed his opinions as to the "why" of the things he observed were happening. The "what" of his studies I believe, were influenced by a fourth man who was born when Gann was born, and died within a year of Gann's own death. A man who changed the scientific world as much as Gann changed the trading world....Albert Einstein.

An unlikely but important relationship

You had to know who Einstein was, if you were Gann. Gann confessedly studied everything he could find:

"After exhaustive researches and investigations of the known sciences, I discovered that the Law of Vibration enabled me to accurately determine the exact points to which stocks or commodities should rise and fall within a given time. " - WD Gann

Einstein certainly would have been cited in his exhaustive research of the "known sciences". What people haven't realized until now is how closely unified their work was and how greatly Einstein influenced what Gann observed in the movement of the markets. When you see their quotes mirrored together, it starts to become obvious...

Albert Einstein: “Concerning matter, we have been all wrong. What we have called matter is energy, whose vibration has been so lowered as to be perceptible to the senses. There is no matter.”

WD Gann: "After exhaustive researches and investigations of the known sciences, I discovered that the Law of Vibration enabled me to accurately determine the exact points to which stocks or commodities should rise and fall within a given time. "

WD Gann: "There is a definite relationship between TIME and PRICE".

When Gann saw a price candle, he didn't just see a price candle. Every price candle had 2 components....it had an open high low and close "price" component, but it also had an associated support and resistance level component. Listen to what he says in this very practical revelation:

Granted, there are a lot of subtleties to some of Gann's higher level teachings, but the bulk of what we've discovered to be the most pragmatic approaches....the 'meat on the bone' with the easiest to follow and replicate techniques are the following:

a. Find the time cycles he was referring to, by doing what he said - studying the averages of the historical data of the market and time frame we're studying

c. Observe how the markets "vibrate" between the TIME-PRICE resistance levels. This vibration controls where the market will go, and how long it will take to get there.

Here's an easy exercise....go back on the time frame you trade....say a 5 minute Emini S&P Chart. Keep track of the times of day that the market has been forming pivots in price. Do this for the past 14 days. Store the information in an Excel sheet with columns that are easy to spot trends and confluence with. After a few days, you're going to notice that certain "times" are hot spots in time....times where the market almost always reverses.

Now, pick the top 10 times from your analysis, and project them forward to the next trading day. Say one of your times was 10:09. When the market gets to 10:09, draw a vertical line through the candle, and then a horizontal line AT THE CLOSE of the candle. You're going to observe 2 things. First, 60-70% of the time, the market will turn again, at that time. Second, 65-70% of the time, the market will bounce at the resistance level you drew. This one exercise takes about an hour to perform, and will make you more of an advanced Gann trading trader than 80% of people who try to understand what he was teaching. 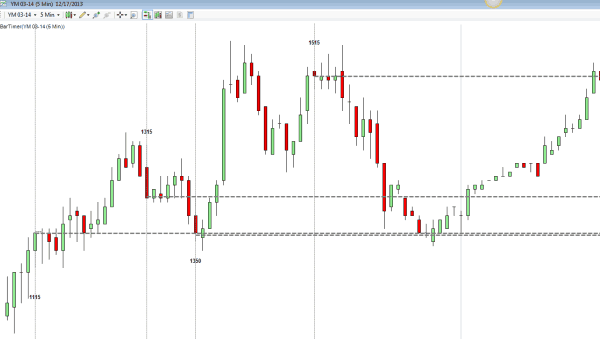 When Gann trading, finding cycle times and resistance levels isn't as hard as some courses would have you believe

Gann trading is another way of saying "data mining"

BackToTheFutureTrading.com produced a retail-trader friendly Ninjatrader indicator version of this data mining software that studies the past records of the averages of any instrument between 1 minute and 240 minutes to discover the times the market has been moving up, or down - consistently - for how long and in what direction. Similar to the Tradestation study above, they've discovered that these sorted times discovered by the data mining software are accurate about 70% of the time out into the future of the market the next day. This allows traders to sit and wait at pre-determined times and wait for moves to form and take off, as opposed to the conventional technique of applying multiple lagging technical indicators to a chart and using that lagging information to base an idea for what the market will do next.

There's a little more to this, and I'd like to give you some more training if you're up for it. Please take advantage of our demonstration offer below to learn more practical techniques to Gann trading without spending a decade of your life reading dusty books in an ancient library. With modern trading computers, this gets even easier, and more practical.